India Women were left with a mountain to climb after witnessing a batting collapse in the morning session on day three on Friday (June 18). The tourists lost their nine wickets for just 64 runs after their opening batters Verma and Smriti Mandhana (78) put up a 167-run stand for the first wicket in response to England’s 396-9 declared in the first innings.

Meanwhile, the rainy spells kept interrupting the game and forced the umpires to call early stumps. At stumps, India’s scorecard read 83/1 in the second innings. Shafali (55*) and Deepti Sharma (18*) were present into the middle as the visitors still trail by 82 runs. 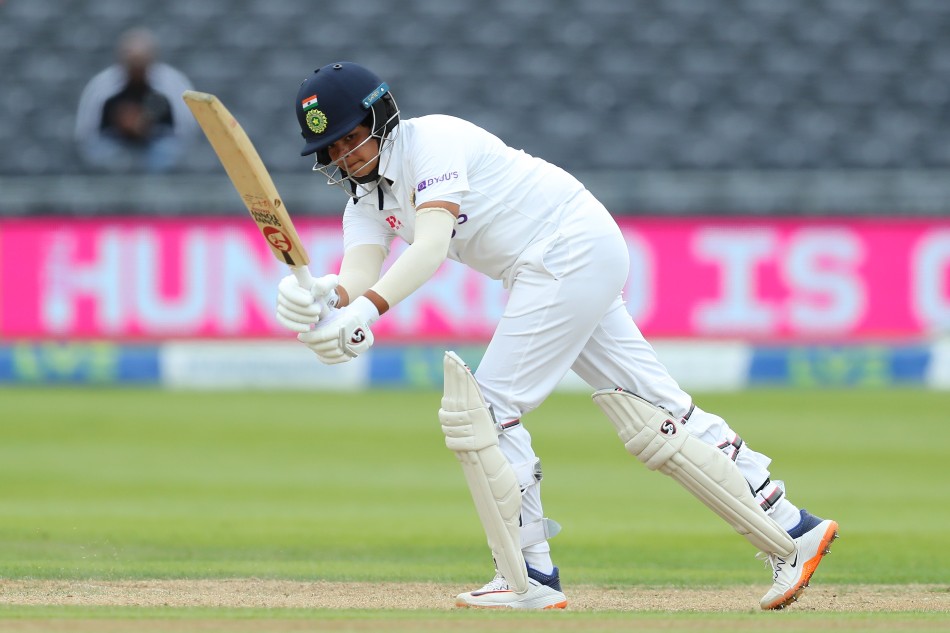 After a dramatic collapse on the second day, India’s batting woes continued as they lost five wickets for the addition of just 44 runs in 21.2 overs, undoing the tremendous effort by 17-year-old Verma (96) and Mandhana. Debutants Deepti Sharma (29 not out) and Pooja Vastrakar (12) put up a 33-run stand for the ninth wicket but could not save the team from follow on.

In the second innings, trailing by 165 runs, India were 29 for 1 at lunch after Mandhana was dismissed for 8. The tourists were dealt a massive blow early on with the dismissal of the left-handed Mumbai opener.

Women with 50s in both innings of debut Test:

Debutant Verma, however, yet again impressed with her batting skills and temperament as the youngster kept scoring runs and became only the fourth batter to score half-centuries in both innings of a debut Test. The explosive right-handed batter notched up her second fifty in the game off just 63 balls.

Earlier in the day, the Indian batters struggled in their first innings against the England spin duo of Sophie Ecclestone (4/88), who was the main tormentor, and Heather Knight (2/7) for the most part before pacers Katherine Brunt and Anya Shrubsole took the last two wickets.

India scored their first runs of the day after 20 balls and by then had lost two wickets including the crucial one of vice-captain Harmanpreet Kaur. Harmanpreet was out after an England review in the second over of the day without adding anything to her overnight score of four. She was ruled leg before off Ecclestone.

Tanya Bhatia fell two overs later without disturbing the scorer after facing six balls. She too was dismissed by Ecclestone, who then dismissed Sneh Rana (2) with a turning delivery to reduce India to 197 for 8. England took the new ball after 80 overs and the Indian first innings ended 1.2 overs after that with the dismissal of Pooja Vastrakar (12) and Jhulan Goswami.