Conor McGregor bumps into a horde of fans while cycling in California; Stephen Thompson gets a custom-made ‘NMF’ robe

It goes without saying that no other UFC star is as popular as Conor McGregor. The charismatic Irishman has delivered plenty of entertaining performances inside the octagon, which has served him with millions of fans across the globe.

Although ‘The Notorious’ has lost two of his last three fights, his stardom has not yet faded away.

In the latest episode of UFC 264 Embedded: Vlog series, McGregor was seen cycling on the streets of California. Amazingly enough, the 32-year-old was continually greeted by fans who were traveling in their cars.

Just outside his gym, a horde of fans approached McGregor, who passionately let out the “Conor” chants. 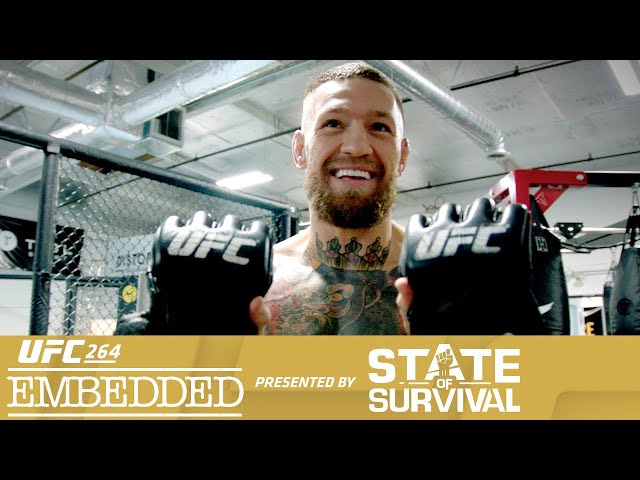 Making sure they get entertained, the former UFC champ posed for his fans while sitting on his bike.

McGregor proceeded to showcase his private gym in California, where John Kavanagh was already present. He also revealed the “exact same” octagon placed inside his gym.

McGregor is set to take on Dustin Poirier in the main event of UFC 264. The two had previously locked horns at UFC 257 earlier this year, where ‘The Diamond’ secured a second-round TKO win.

The UFC made sure that Stephen Thompson was treated right upon his arrival at the athletes hotel. Thompson received a custom-made ‘NMF’ robe, which a delighted ‘Wonderboy’ wore with a big smile on his face.

Thompson last fought Geoff Neal in December 2020, whom he defeated via unanimous decision. The 38-year-old is confident that a win at UFC 264 should be good enough for him to lay claim to a shot at the welterweight title.

The 38-year-old is currently ranked fourth in the division, behind Colby Covington, Gilbert Burns and Leon Edwards.

Thompson’s opponent, Burns, is also certain about his chances of defeating the ‘NMF’. In his last outing, the Brazilian lost to his former teammate Kamaru Usman in a title fight at UFC 258.

According to Dana White, a win for either man will not earn them a title shot. The UFC president has repeatedly made it clear that Covington will be Usman’s next challenger.

Eager for anything and everything Conor McGregor ahead of UFC 264? We got you covered at SK MMA!